Scoutco LLC is a small family company, consisting of Mike Moore, his wife Jennifer, and his brother Eddie. We are located in the heart of the Shenandoah Valley of Virginia, and have been in business since 2007. Originally, we were a shop offering vinyl signs, decals, and vehicle lettering, all on a part time basis from our home.

Having been heavily involved in the IH Scout hobby since the late 1990’s, Mike and Eddie were no stranger to the rust and crust that makes an IH what it is. In 2010 the sign business got to the point where it was busy enough that Mike quit his “day job” to do it full time. Along the way, there was one persistent acquaintance, that pestered him to put floors and rockers in a Scout II for several years, until he finally caught Mike during a slow time in 2011. Long story short?…We began serving our customers with IH Scout and truck restorations in 2011. Now, Jennifer works in the office, doing everything you can imagine: payables, receivables, payroll, takes care of nearly all of the sign work, makes sure Mike and Eddie are working in the shop, janitor, etc. Mike and Eddie are the down n dirty, getting’ greasy shop crew, building the trucks.

What began as a simple floor and rocker panel replacement from that persistent customer in 2011, quickly escalated to a full-bore frame off, drive train swapped “resto-mod” on this gentleman’s 1977 Scout II, completed in 2012. This truck won “best in show” at Carlisle, PA at the regional Scout show, and followed that up with “Grand National Champion” at the Scout Nationals show a few weeks later.

Following are some photos of the build process of this Scout, our very first project (outside of our personal “hobbyist” builds). 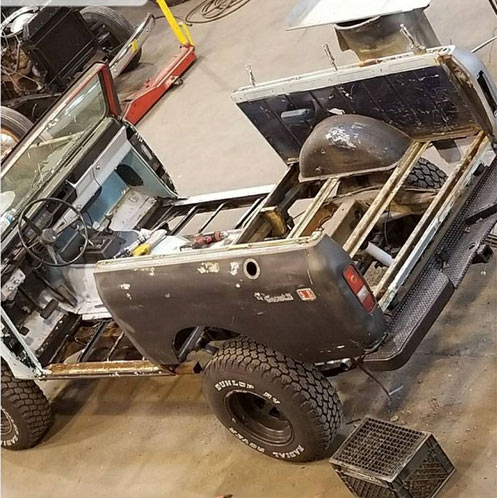 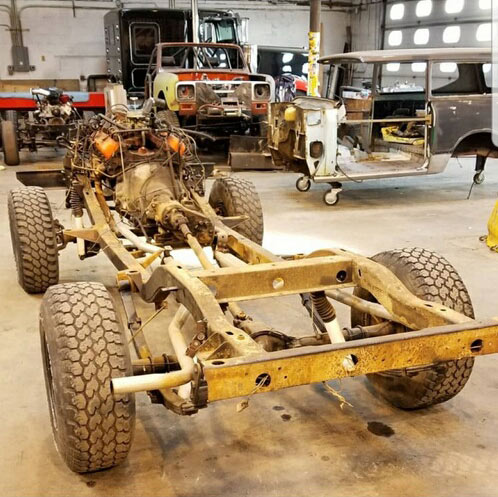 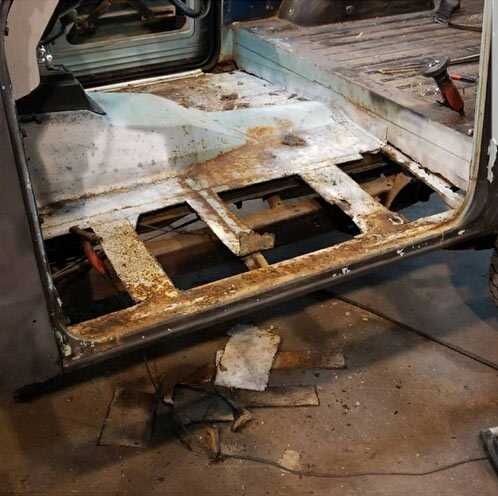 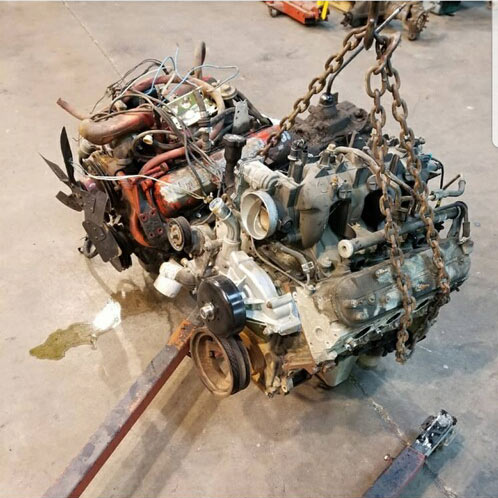 So, this ‘77 got us some attention at the shows, as well as a few awards. It also gave us a bit of a following on the social networking sites, and the IH specific talk forums online. This quickly turned into more Scout work for us, too. The following year, 2013, we followed that first Scout up with yet another “Grand National Champion” Scout II, built from the frame up for a local customer.

The following year, 2014, with the newly developed “Build Off” competition coming into the picture, we were poised to build something better than we had ever done before. We had a customer with the right budget and ideas, and the right timeframe to get a massive project done. The results brought home the award we were looking for, the 2014 Build Off championship! Below are a few pictures of this one. It was a 1977 Scout II, with a new LS3 crate engine installed after a dousing of chrome and polished metal. The custom interior was a collaboration between our in house guys, and a local upholstery shop. This Scout is really a new vehicle, wrapped in vintage clothing. 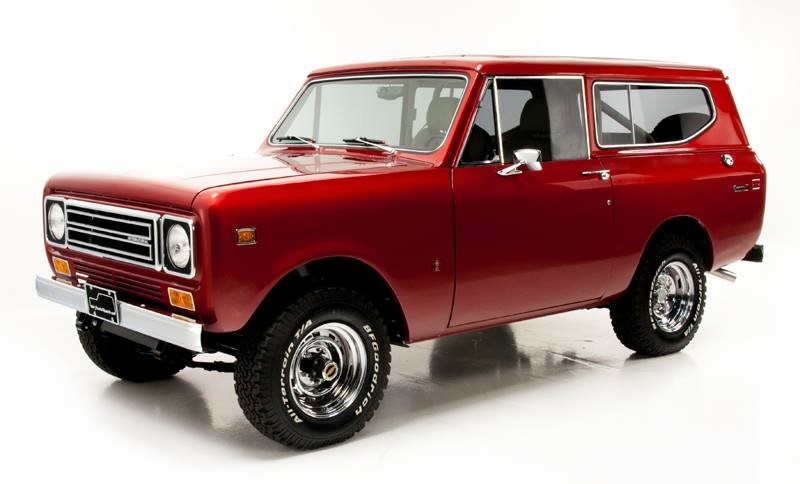 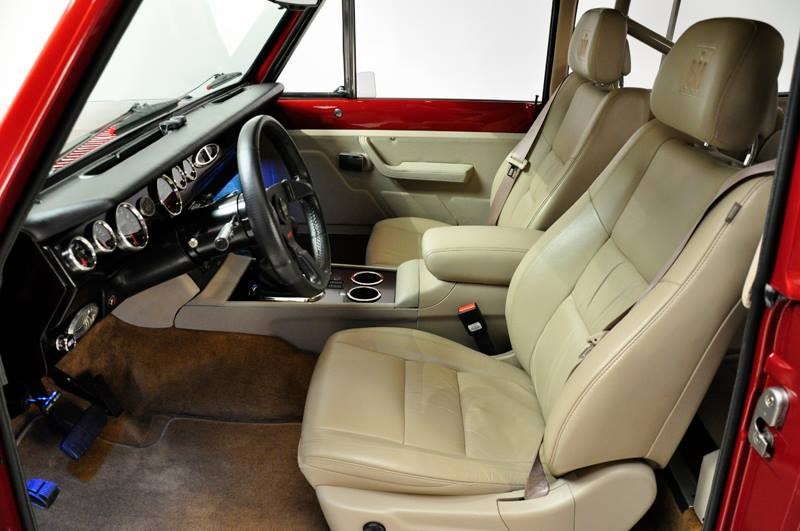 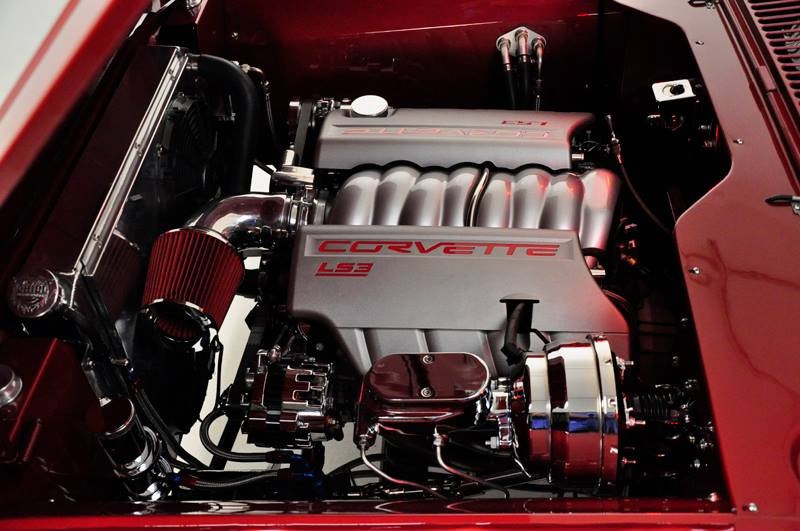 For the 2016 show, our build off truck was all in the family. Mike and Eddie’s father, Jim, did some trading back in the mid 80’s, and ended up with a 1924 International model 63 truck, and we completed a restoration on it for the build off. A huge switch from the expected for us, but the truck turned out great. We executed our plan to restore it, not over-restore it. We wanted it to look like it did in 1924 when it was new. No extra frills, no extra pinstripes or extravagant woodworking. Just like it was. What makes it NOT stand out, is exactly what makes it stand out. We aren’t sure what made us feel better: Cranking the hand-crank and hearing it fire up the first time in decades, or driving it out of the show field having just been awarded the 2016 Build Off championship award!
So, this brings us up to our current projects. We now have eleven projects here in our shop, and several more waiting on our attention. We are actively seeking to add to our team in the shop, in order to be able to complete projects in a more timely manner…of course, while still retaining the quality of work that we have striven to be known for. We are truly blessed to be where we are, and have worked hard to make it happen.

We generally put out one major build, and several smaller projects per year, depending on the scope of the work required. We have a 6500 square foot shop, that generally remains pretty full on any given day. You can usually find several Scouts or pickups disassembled fully, or simply having some engine issue or rust repair addressed. Below are some photos taken of projects through the past several years.

So, that’s us. Some days it is all the fun in the world, and some days we don’t want to get out of bed to come to work. In the end, it is a great thing to be able to work with family, and do something that most folks cannot do themselves. It has it’s ups and downs, but when we deliver a project at it’s completion, the smiles and positive feedback after the customer sees and drives their truck…THAT makes it all worth it!